Our Thanks to his many Sponsersand good friends

At Work for the Factory 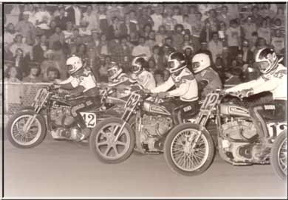 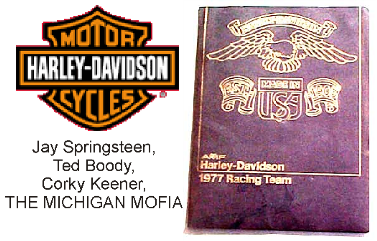 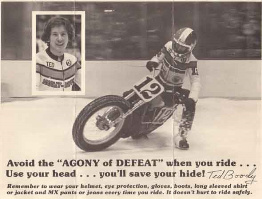 This Picture was taken in the winter of 1977 and used as a safety poster by Staten Lorenz who promoted the indoor ice shorttrack races. The caption (Agony of Defeat) was a Wild World Sports program that aired for many years and Ted had the distinction for 8 months of following the skier who crashed down the ski jump, as the ride that went over the handle bars and took a very bad spill. 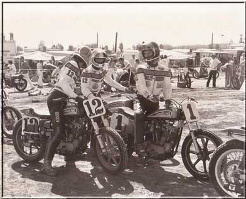 Staton took Ted to schools around Michigan giving seminars on the safe way to ride a motorcycle. At some schools he would speak to over 600 students he was only 17 years old.

The Factory 250cc Shorttracker used by Ted, Jay Springsteen and Corkey Keener. The bike was an Italian Aermacchi Harley-Davidson built in Italy. It was a 250cc two stroke originally built for Moto Cross and converted for the oval. 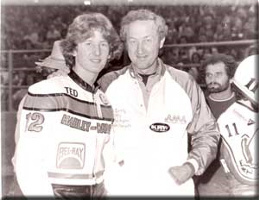 Ted and Jay on the factory 750 twins at Peoria Ill
1977. The days when the guys rode the big twins
and the TT races were full of thunder. 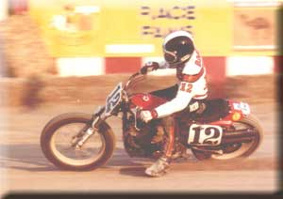 Ted wide open at the 1/2 mile Ascot raceway Gardena California. These pictures were from Teds collection and donated by Teds wife Terry just for the website. Thank you Terry.