Our Thanks to his many Sponsersand good friends

The Making of a Professional

This article was written by the Lansing newspaper and it ran in the sports section, the best I can remember, in 1971. Kawasaki of Lansing our our cycle dealership.

Ted Boody Jr. started riding at 7 years old. Ted raced for the first time at Cadillac Michigan in 1966, he was 8 years old. He won first place in the kids class on a Kawasaki 85cc He was so small his dad had to hold him up. His racing career was quite slow until the mid season of 1970 when he finally convinced his father to take racing more seriously. He and his father ran a few Moto-Cross events and Ted Jr. ran a few short track events. Ted took a real likeing to the fast events, like short track and TT racing.

In 1971, he hit the racing circuits around the state. Places Like Flints Auto City Speedway, Millburg Speedway (near Benton Harbor), Stanton TT races, and Jack Pine Lodge. At Millburg Speedway in 1971, he won high point trophy for the season on the short track and second place for the TT Scrambles. He had 14 wins and a combination of 20 seconds and thirds.

This year he is riding a Kawasaki Green Streek 100cc. racer and an Ossa 125cc, and for the first time a Kawasaki 250cc. He is ahead for the high point trophy again at Millburg, which is awarded in October for the 100 expert class.

Also this year he has raced 1/2 mile (run on 1/2 mile fairgrounds, like horse races are run on), at Caro, Vassar, and Marion Michigan. On short track (run on 1/4 mile car race tracks ), at Flint Auto City Speedway, Millburg Speedway and Clark Speedway. 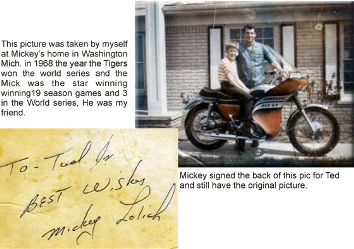 He also made a trip to kentucky over the July 4th weekend and raced on the short track near Owensboro. He had to run in the open class as they do not have a class for kids. He won the 100, 125, and rode a 250 for the first time and won the consoliton race on that. He also has raced TT Scrambles at Victor Park and Stanton. So far this year he has 29 Trophys, 18 of which are first plase. There is about a 1/4 season left to race.

Ted is about 5ft 6in and weighs 112 lbs. He will be in the ninth grade at Dewitt high School in September. He is a B average student. Ted rides for his father and occasionally with his father on TT Scrambles out of Kawasaki of Lansing.